2012 in Review: Windsor-Essex From A Food Perspective 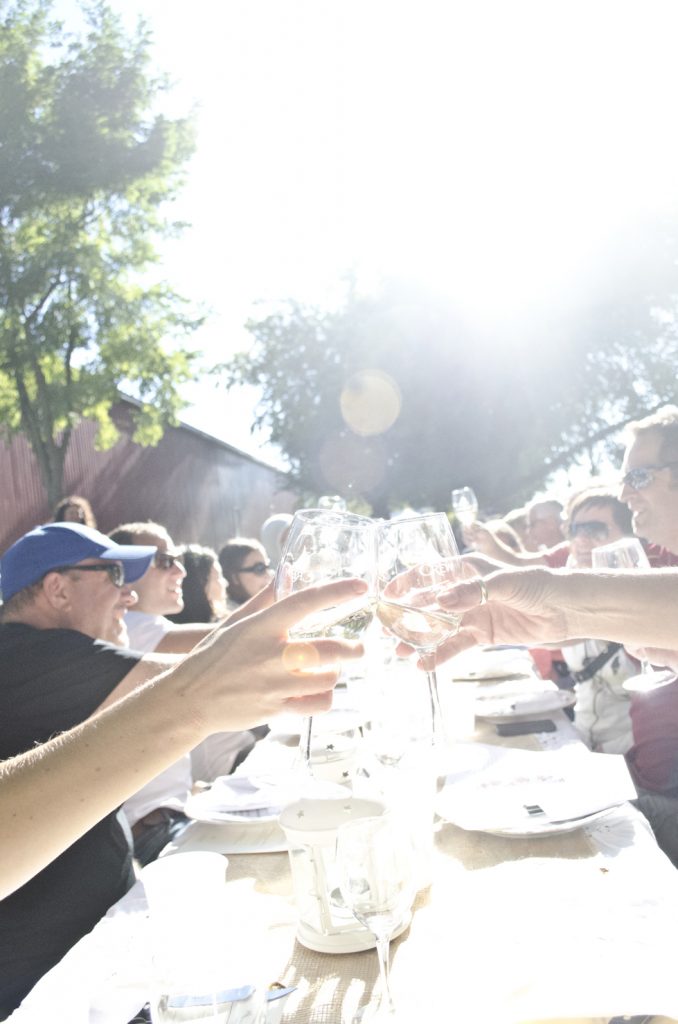 2012 was a great year for WindsorEats with plenty of great things that happened over the last 12 months for food lovers in Windsor-Essex. As we count down the final days of the year the world was supposed to end, lets look back at the year that was:

As with every year, 2012 started off with a culinary bang thanks to our Winter Bites Restaurant Week. We had over 25 restaurants showcasing some fantastic, discounted 3-course meals at prix-fixe amounts. Participating restaurants provided us with the best numbers to date which we’re looking to surpass in 2013.

Mark this one up as a win for the little guy. In a move that is a reversal of restaurant stories we hear nowadays, January saw popular barbeque restaurant Smoke & Spice take over a space vacated by an international restaurant chain.

After some extensive renovations, including more than doubling their smoking capabilities, Smoke & Spice reopened to an onslaught of business even greater than their original location.

A little restaurant in Kingsville is making a name for itself with a unique event held every January. Winter Wonderland, the creation of Mettawas Station, is an outdoor dinner held deep in the heart of winter. WindsorEats was fortunate enough to attend in 2012 (tickets sell out quickly every year) and documented the 5-course dinner which had each item paired with a local wine.  Take a look at the photos yourself. 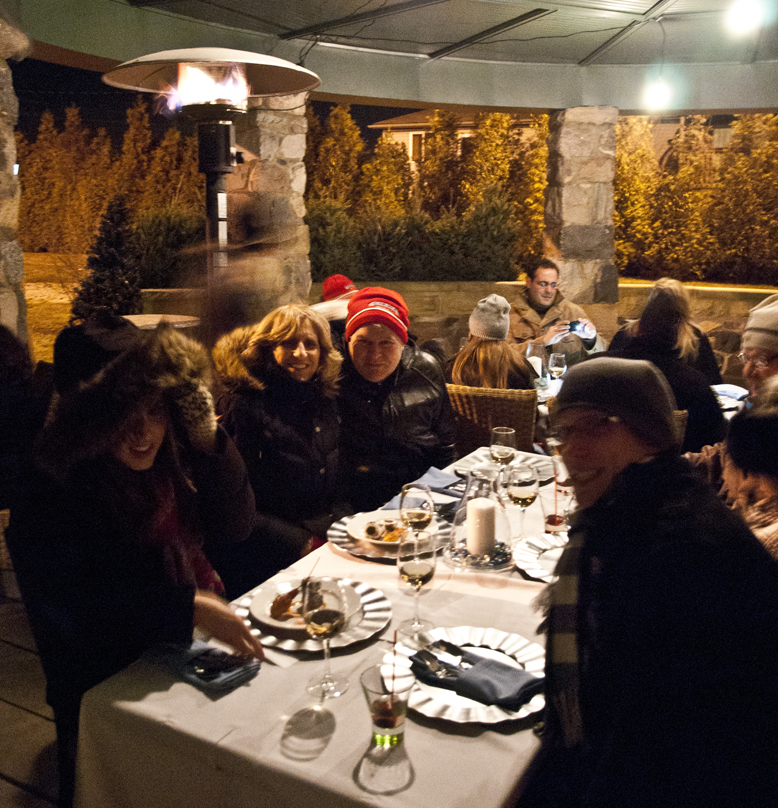 Tickets for Winter Wonderland 2013, to be held January 26, are already available for purchase.

To do our part in helping the bee population (and pollination) alive and well, Adriano Ciotoli of WindsorEats started to learn all about beekeeping. Oh ya, and I wanted some honey.

Interesting tidbit of information: from what I’ve been told, a typical hive can contain anywhere from 40-60,000 bees.

All Local All The Time at Rino’s Kitchen

Much to the delight of WindsorEats, Rino’s Kitchen converted their entire menu to locally sourced products in March. His first local menu focused on pork, but owner Rino Bortolin has since included lamb, beef and more.

To help educate his diners, Rino’s Kitchen has also began hosting intimate butcher demonstration dinners, showcasing butchering skills and where each parts we eat come from.

Chanoso’s Restaurant continued their annual Earth Hour tradition by turning off all non-essential lighting for the night and having a lovely evening of candlelight dining and live acoustic musicians. 2012 was their fifth year honouring Earth Hour, an event to raise awareness of the need for climate change action and support for initiatives for the long-term sustainability of our environment. 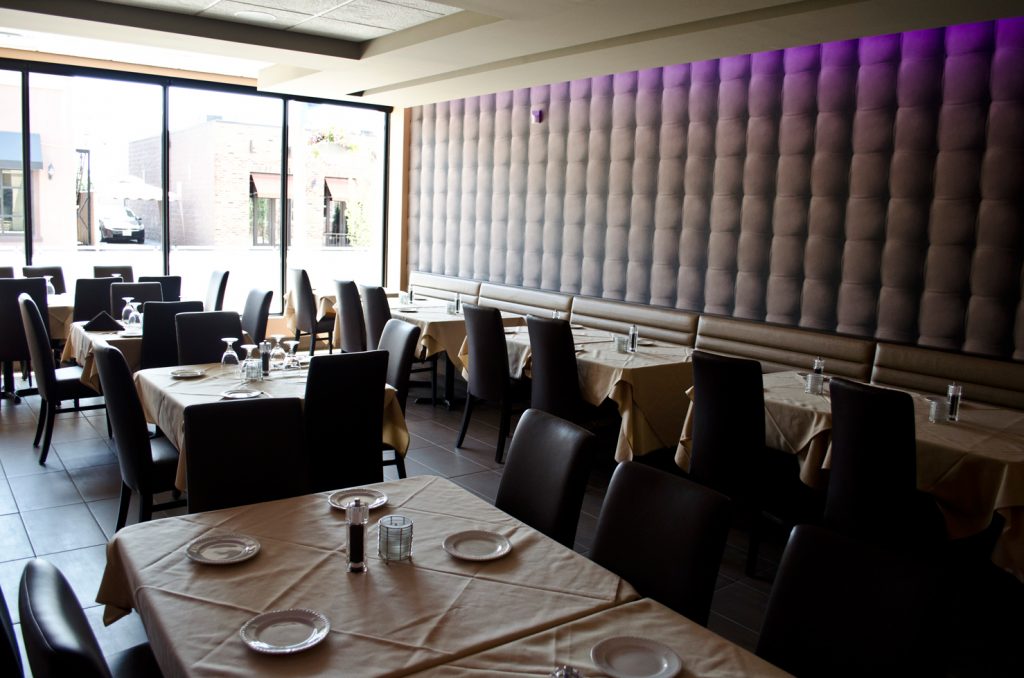 Via Italia mainstay, La Contessa, closed their doors in March to undergo extensive renovations with the interior for the restaurant being completely gutted. When the doors re-opened in June the results were stunning. Throw in Via Italia’s makeover and La Contessa now also has the largest patio in Windsor’s Little Italy. A great combination for a night out.

Thanks in part to a media tour WindsorEats hosted that included a writer from the international publication, Motor Burger‘s Deux Chevaux burger was named as one of Canada’s top 5 burgers. This gave the restaurant much deserved exposure, putting them in elite company with some of the nations best chefs including Kunal Ghose of Red Fish Blue Fish in Victoria, and Emily Homsy of Au Pied du Cuchon in Montreal.

Local Wineries Make Out Like Bandits at Wine Competition

In a competition that featured over 3200 wines from 22 countries, taking home over 25 medals is quite impressive considering the Essex Pelee Island Coast wine region is still an afterthought for many. With Mother Nature providing our region with perfect grape growing conditions this past year, there is a very good chance to bringing home even more medals in 2013.

What goes best with a burger? Beer of course, so in April Motor Burger began their journey as a nano brewery by brewing some pretty creative and spectacular beer. 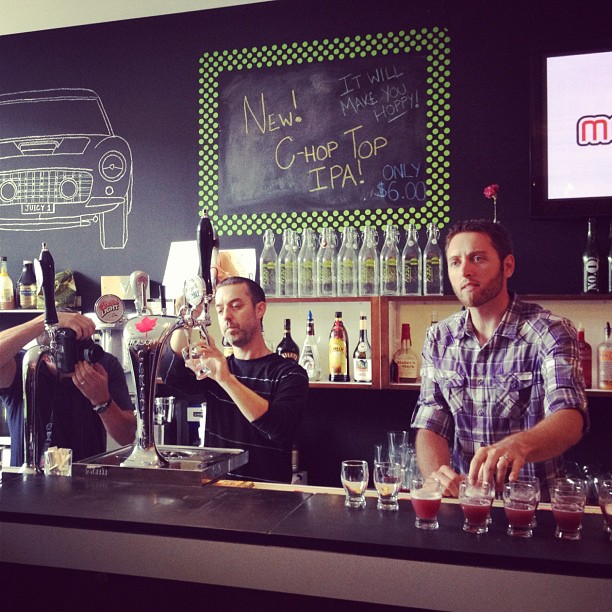 WindsorEats had the opportunity to bring Motor Burger owner Gino Gesuale on a farm tour in Windsor-Essex which led to the creation of Deja Blue, a blueberry lavender beer created with products from Serenity Lavender and Klassen Blueberries. The summer beer quickly sold out.

2012 saw WindsorEats host another season of our popular, award winning Wine Trail Ride cycling tours.Named as the Best Culinary Tourism Experience by the Ontario Culinary Tourism Alliance in 2009, each ride visits our Essex Pelee Island Coast wineries for tastings and ends with a wonderful long table dinner made with local ingredients. The 2013 season begins May 18. 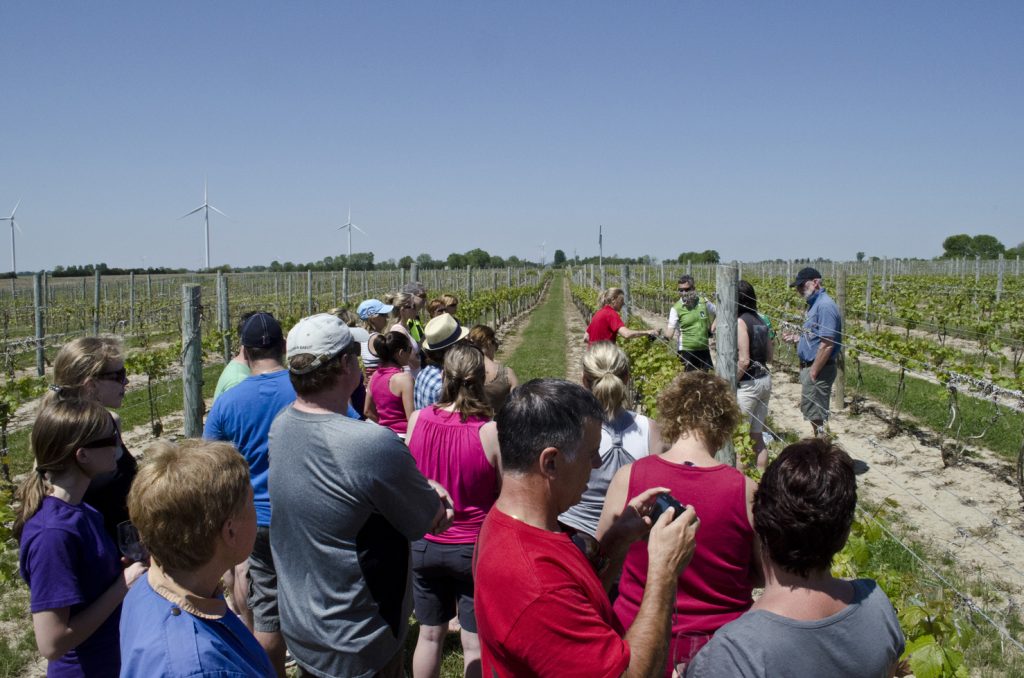 Our Wine Trail Rides are so well loved, 100% of our 2012 riders (yes, every single one) would recommend them to a friend and received feedback like:

On June 1, 2012, our users awoke to a brand new WindsorEats experience. More detailed business information, interactive maps, easier navigation and a whole new commenting system gave our users the ability to provide their own feedback on their dining experiences.

As part of the Multicultural Council’s Carrousel by the River, celebrity chefs David Rocco and Christine Cushing visited Windsor and gave fantastic live cooking demonstrations while telling stories to the crowd. WindsorEats’ own Adriano was fortunate enough to emcee and introduce David. 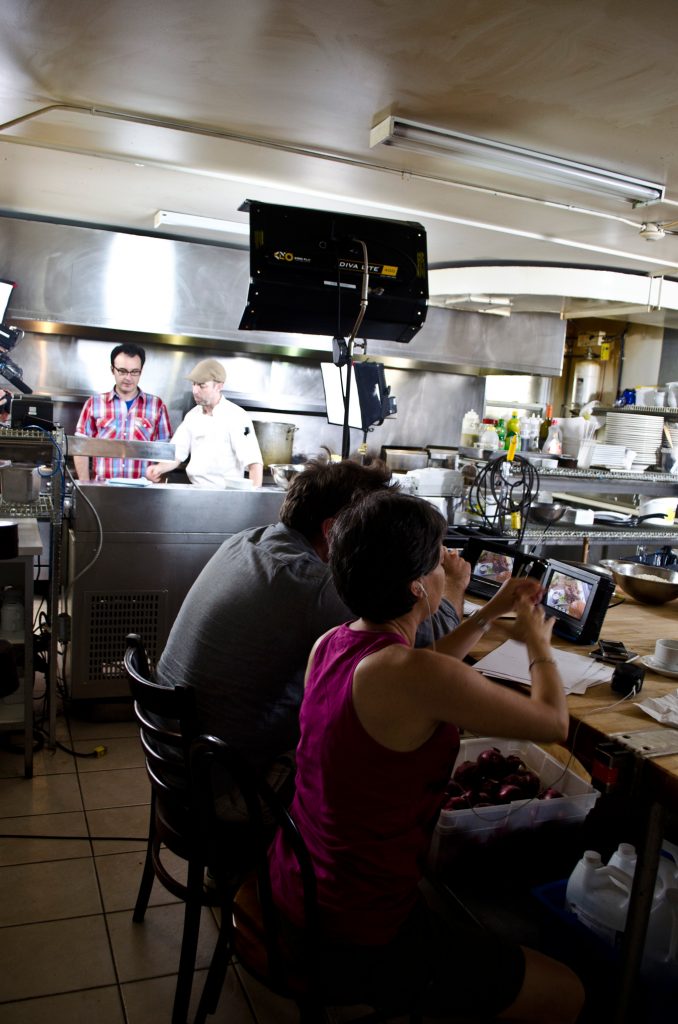 Windsor restaurants got their share of the national spotlight in 2012 and both Motor Burger and Smoke & Spice were no strangers to the bright lights. Both restaurants hosted John Catucci and his crew from You Gotta Eat Here, a popular television show on the Food Network Canada. The TV crew spent a week shooting on location at both restaurants for the two episodes which will be featured during the shows second season in 2013. We’re keeping our fingers crossed that the clip of John wiping Adriano’s face with a napkin makes the cut.

After the success of Motor Burger’s Deux Chevaux (see above), CBC Windsor went on a quest to find out which citizen had the best burger recipe in the region. Residents sent in their recipes and the staff and crew at CBC selected 3 as finalists to cook their burgers at the studio for a panel of judges. As part of that panel, Adriano was fortunate enough to sample each of the burgers. Such a tough job! (please note the sarcasm). All 3 finalist recipes were then posted on WindsorEats.

Two new festivals called Windsor-Essex home in 2012. WindsorEats had the pleasure of being a sponsor for both the Serenity Lavender Festival held in Colchester as well as the Fork & Cork festival held in downtown Windsor. Both festivals, held on the same weekend, drew great crowds and we’re anticipating their return for the 2013 festival season.

There was some food controversy in the region back in July when the local health unit banned raw meat dishes at local restaurants including the delicacy kibbeh, popular among Windsor’s large Middle Eastern population. Both Mazaar and Rino’s Kitchen stood up for their belief that there was nothing wrong with the dish if proper safety protocols were followed. The debate in the community was strong in both corners before the issue quietly faded away.

A Brewery Returns to Windsor 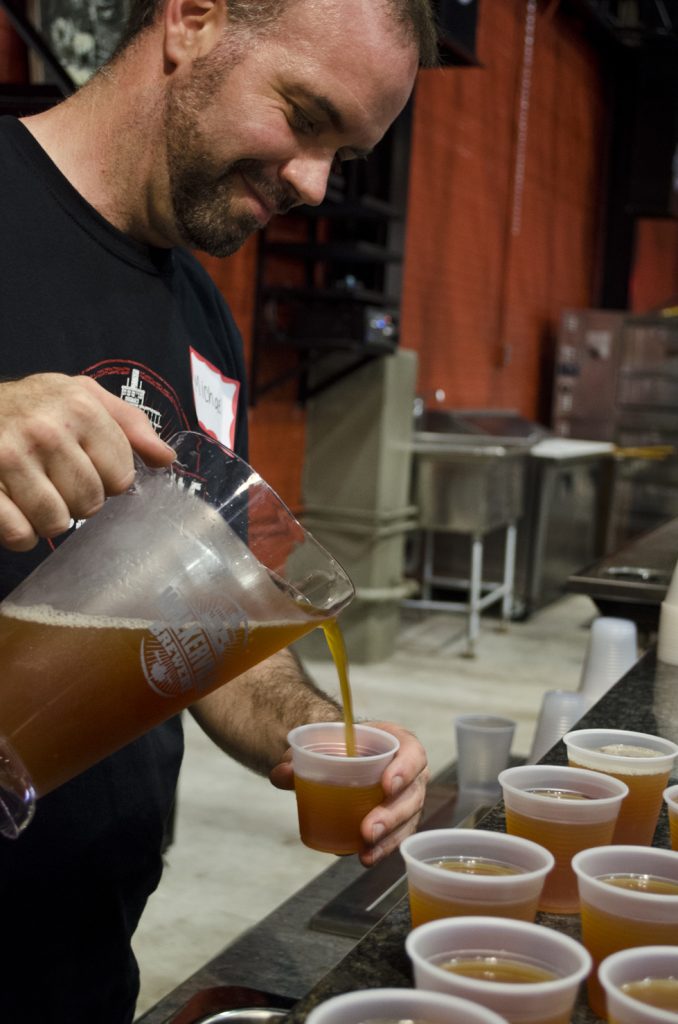 Hallelujah! After an absence of a few years, Walkerville Brewery was revived and, along with Motor Burger’s Motor Craft Ales, brought the city’s craft beer scene back to life. Walkerville Brewery has already created special seasonal brews including an Autumn Rye Ale and a Roasted Chestnut Brown Ale.

In May of 2011, WindsorEats, in partnership with The Beer Store, began a fundraiser called Bikes & Beers to support and bring awareness to the Returns for Leukemia drive held at every The Beer Store across the province. We received such a huge amount of feedback from people who either missed out or wanted to do it again that in 2012, in addition to the fundraiser ride, we included a monthly Bikes & Beer cycling tour.

Participants cycle through Windsor exploring the city one beer at a time, not only sampling brews but also food at local restaurants. The 2013 Bikes & Beers season begins in May with our fundraiser ride for Returns for Leukemia.

Bikes & Beers weren’t the only new tours added to the WindsorEats lineup. Our selection of food tours expanded to include those of the walking kind. In September, we launched Windsor-Essex’s first culinary walking tour, Rye, Tequila & Beer Oh My!. They have been such a huge success that we’re currently working on a few more walking tours for 2013 that take in greatness of the Windsor-Essex culinary scene.

When the opportunity presented itself, Thai Palace owners Charles and Ray Anderson took full advantage to move their restaurant. After taking over the former church building and completing extensive renovation, not to mention operating out of a mobile kitchen for a few months to provide takeout for Thai Palace die-hards, the makeover was complete and a massive success.

While there are a lot of coffee shops in Windsor-Essex, Dane Charles felt that there was an opportunity with no one taking the time to brew a proper cup. Welcome Salute Espresso Bar. Dane opened Salute to showcase the passion that brewing a cup of coffee deserves, even calibrating the water used to certain mineral levels which are optimal for making great coffee. As you might be able to tell, we’re always big fans of people who showcase their passion of food and drink through their business. Also, we love what he’s done with the place.

So there were some of our favourite food and drink moments of 2012. What were yours?