Must-Try Burgers in Windsor-Essex for 2015 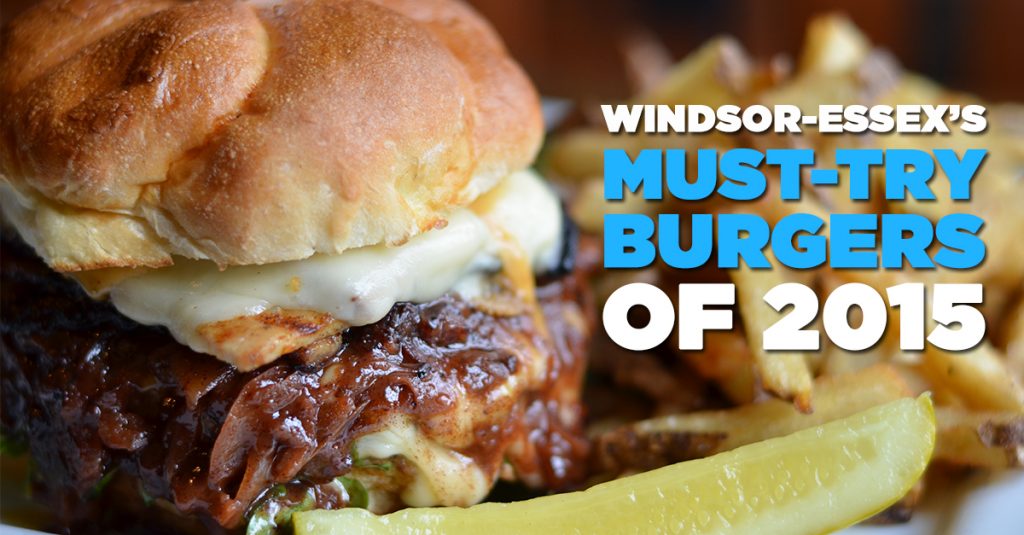 Windsor sure does love its burgers and it’s for a pretty damn good reason. Local restaurants have been kickin’ out some pretty fantastic creations over the last few years.

If you find yourself hankering for a good, filling burger, be sure to try out some of these which we feel are must-try’s for 2015.

When Chef Johnny Oran at Parkside Grille took over the kitchen, he felt they needed a burger to appeal to those who love heat in their food. A few staples he loves to have in his kitchen are house pickled jalapenos and sriracha mayo, so these became the first two elements that he decided must be in this burger. Throw in pickles, onion rings, fire roasted hot sauce, smoked cheddar between a brioche bun and you’ve got yourself the Firehouse Burger.

Chef Johnny says what makes this burger so special is the fact he uses the smash technique. That means the meat is worked as little as possible and pressed on a flat top grill to build a crisp and caramelized crust. The result is a more juicy, more flavourful and all around superior burger.

Tasty Tip: It looks like a heap of a burger, but it holds together very well, which is important in a burger. The best way to attack it is to press down on the top bun just to slightly smash down the onion rings a little and go to town!

“My idea of a good dinner is, first to have a good dinner, then discuss good food, and after this good food has been elaborately discussed, to discuss a good topic – with me as chief conversationalist.” – Winston Churchill.

Named in honour of the great Churchill, this is one great burger to discuss.

The idea for this burger was conceived when The Manchester purchased a smoker to smoke all their own meats in house. Originally, the first dish they created was a pork belly sandwich with the same toppings which became one of their best selling sandwiches. Someone then had the genius idea to transfer that sandwich onto a burger and The Churchill was born.

It was named after former British prime minister, Winston Churchill, who was strong, bold and adventurous, just like the burger! There’s no frozen store bought product here. This burger is 100% made with care and love at the pub.

Tasty Tip: It pairs quite nicely with Walkerville Honest lager or any of the many pale ales on tap. The hops compare nicely with the meats natural flavours. Also, maybe make sure you can adjust your belt safely after consumption.

This ain’t no freak storm that lifts up thousands of man eating pigs and drops them on the west coast (yes, that’s a Sharknado reference).

To give credit where it’s due, the Porknado was inspired from Chucks Burger in Hamilton where chef Jim Renaud visited, but this bad boy has Jim’s fingerprints all over it.

It’s not called a Porknado for nothing. The all bacon patty is topped with jalapeno infused bacon and pulled pork with a healthy spread of charred pineapple mayo.

Tasty Tip: The Porknado pairs perfectly with a smoked porter on tap.

Many people think about Rockefeller Lounge as a place to go for cocktails more-so than a meal. This burger is one of several items on their menu that will make you reverse that thought.

The 8oz. patty is ground in house and topped with house made ketchup, caramelized onions, havarti cheese, maple bacon and arugula and comes with a side of fresh cut fries and homemade BBQ aioli dipping sauce.

You’ll be able to taste the freshness of the ingredients with each bite.

Tasty Tip: Visit Rockefeller on a Monday and you get the Butcher’s Burger with side of fries and a pint of Rockefeller Lager for only $16.

We normally wouldn’t put a challenge on the list, but, the price point is just right at $24 and the size isn’t too crazy.

All of this fits between a soft oversized burger bun, and then skewered with three pickles to finish it off and weighing in at 4 pounds of pure, unadulterated gluttony.

Here’s the thing about Jack’s: they make some damn good burgers. Their menu changes fairly often (seasonally with what’s available, who’d have thought?!) and they give their staff’s creativity free reign with a special burger each week. That being said, they do have two burgers which are the bees knees and remain a constant on every menu through all the changes. This is a story about one of those burgers.

The Spicy Jack is 7oz. of Ontario beef topped with beer braised onions, a mix of roasted and pickled chili and jalapeno peppers, two slices of smoked bacon, Monterrey Jack cheese and Jack’s own house made jack sauce piled between the buns of a sesame kaiser.

What makes this burger a keep on the menu is it’s the right combination of savoury and spice, allowing you to enjoy the complimenting flavours of the bacon and cheese, yet  still giving you a bit of heat.

Tasty Tip: The Spicy Jack and beer are a match made in heaven, especially the False Alarm IPA, made right inside Jack’s!

This is the rockstar of burgers in Windsor-Essex. Listed as one of the top burgers in all of Ontario by Thrillist and all of Canada by Reader’s Digest, it  has received its fair share of media exposure.

This Motor Burger creation of a house ground beef chuck, brisket and flank patty marries beautifully with the nuttiness of Gruyere cheese, slight sweetness of caramelized onions and the sharpness of Dijon mustard. It really is a fine meal between an artisan brioche bun.

The burger is a tip of the hat to what was one of the most popular cars in France, the Peugeot Citroen. It was one of the companies best sellers with a 2CV, signifying 2 fiscal horsepower..hence the tongue in cheek term Deux Chevaux (it means two horses in French).

Tasty Tip: Don’t be intimidated by this overwhelmingly flavourful creation. You will enjoy this burger as if you were in one of the finest restaurants in France.

We’re going a little bit off the chart and recommending these sliders from The Windsor Beer Exchange. Technically, these aren’t burgers, but, because they have the word ‘sliders’ in their name we felt they should qualify.

The base sausage is Hungarian style with garlic and paprika. The restaurant also adds a touch of curry and, staying true to the restaurant name, a splash of local lager. The sausages rest between fresh sesame seed buns from Blak’s Bakery and are served with house made creamy Dijon sauerkraut.

The taste of the fresh sausage in natural casing alone is enough to say something about this dish. It’s different, in the best way, with a touch of spice. It holds a wonderful crunch from the natural casing.

Tasty Tip: The sliders are a perfect size for everyone. Each of the two sliders are a few mouthfuls and pair well with a light beer or white wine.

Looking for something with a creamy touch?

Enter the Spicy Pig Burger from Joe Schmoes. Don’t let the name fool you. The emphasis of the burger is more about the combination of flavours than it is spiciness. It is 8oz. of hand pressed Ontario beef topped with pulled pork which is tossed in their ever popular Apple BBQ sauce. Add melted cheddar cheese, crispy bacon, and creamy slaw and you have one heck of a tasty burger.

This burger was created by Joe Schmoe himself and deserves the spotlight for several reasons, the main one being that it showcases some of the amazing in-house creations at the restaurant including the pulled pork, sauce and slaw. The pulled pork is brined for several hours before adding a combination of spices and slow cooking.

Tasty Tip: When deciding to try this burger be sure it’s on an empty stomach.

This bad boy will bring your taste buds for a ride.

A 1/4 lb of beef on a bed of arugula and a slice of fresh tomato, topped with some pickled beets, a panko pineapple and a sunny side egg is sure to be an explosion of flavours.

The concept of this burger came to South Detroit owner, Mat Mathias, along his travels to Vancouver. He tried a similar burger and loved it so much he brought the idea of it back home where he put his own spin on it.

The homemade pickled beets and the panko pineapple give this burger a unique crunch. Also, who doesn’t love having a sunny side egg on their burgers? No one. The answer is no one.

Tasty Tip: Ask your server for a couple of extra napkins because things might get a little messy.

As mentioned above, everybody loves eggs on their burgers and the Wakin’ & Bacon delivers in style.

The idea for the burger is the perfect morning-after breakfast sandwich if you’ve had a few too many. Made with two 4oz burger patties, 2 slices of cheddar cheese, house bacon (that takes 7 days to cure and is smoked with maple wood), a fried sunny side up egg and bacon jam on an egg bun.

A great part of this burger is that the egg acts as the sauce.

Mamo Burger has two locations (one in Windsor and one in Tecumseh), making it even easier for you to get your Wakin’ & Bacon fix.

Tasty Tip: Order the Wakin’ & Bacon with tater tots so you have homefries to go with it. It washes down well with a Mill Street Cobblestone Stout.

When I imagine heaven, it mainly consists of these three things: burgers, bacon and beer. Now The City Grill has heard my prayers and combined them into one amazing dish.

The idea of this burger came about thinking of ideas for presentation. Chef Shawn McKerness always enjoyed seeing wooden paddles for beer tasting flights and he thought, wouldn’t it be cool to incorporate that into the menu as a serving vessel?

From there, the burger took shape.

8oz. of a 70/30 blend of fresh ground chuck is used to give a juicy end product. Next is a sharp cheddar cheese and Guinness braised beef short ribs which take 5 hours to prepare, but, they’re sure worth it.

Top that with frizzled onions and pile it on an onion kaiser bun and this burger is top notch!

To add to the presentation and flavour, smoked pork bellies is sliced thick. Thick like a half inch thick. It is then tossed in some maple syrup and baked at 270 degrees to slowly render out the fat and let the maple flavour really infuse into the bacon and eventually start to caramelize. A simple 2.5 hour process.

Tasty Tip: There’s no graceful way of eating this burger. Just follow the light and dig in.