WindsorEats has been named a finalist for three provincial awards.

The announcement marks the 6th year since 2009 that WindsorEats has been named a finalist for a provincial tourism award. WindsorEats has previously been named winners in 2009, 2013 and 2017 for multiple awards including Tourism Champion of the Year, Culinary Tourism Leadership Award, and Culinary Tourism Experience of the Year. WindsorEats also previously won national tourism award for their Wine Trail Ride as well as being named Best Small-Medium Sized Tourism Business in Canada.

“The finalists of the Ontario Culinary Tourism Awards of Excellence represent the very best of what Ontario has to offer,” said Agatha Podgorski, Director of Communications at the Culinary Tourism Alliance. “This year, it’s more important than ever to celebrate our successes and support those working to make our food culture rich, diverse and unique.”

Here’s a look at the Ontario Culinary Tourism Awards of Excellence that WindsorEats has been nominated for this year: 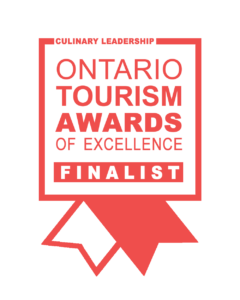 This award recognizes an Ontario organization, collaborative group or community who has or is working on developing a destination through investment in food, drink and/or agri-tourism.

WindsorEats tells the story of Windsor-Essex through its food and drink, encouraging residents to frequent the locally owned establishments in their community while spreading the word outside the region for visitors to learn of the plethora of incredible hospitality and tourism offerings within the region.

As part of our efforts, we’ve not only developed unique experiences showcasing the best and uniquely Windsor-Essex culinary offerings, but we’ve also worked with other businesses and stakeholders to develop their own quality experiential products.

We’ve consistently taken the lead on culinary and tourism initiatives, spreading the word of the amazing culinary offerings in our region and helping others create memories that last a lifetime and spread the story of Windsor-Essex.

This award recognizes an Ontario-based festival or event that demonstrates its commitment to showcasing local food and drink products and is therefore an authentic expression of Ontario.

The finalist nod goes to The Whiskytown Festival, which is a component of establishing Windsor, Ontario, as the epicentre of Canadian whisky known as Whiskytown Canada.

A boutique festival that is different from traditional whisky festivals which are normally held in the winter months, the Whiskytown Festival is set up with a garden party ambiance in the heart of the neighbourhood built by the whisky baron, Hiram Walker, and on the grounds of a historic church built with whisky money, named after his wife and built by his son.

The initiative was developed using Windsor’s unique DNA, something that is unique to Windsor-Essex and celebrates our whisky history. The event helps develop and identify Windsor as the whisky capital of Canada, similar to initiatives conducted in Kentucky, USA.

The Whiskytown Festival brings together world renowned advocates, experts and ambassadors in the field of whisky and distilled spirits. Participants are able to interact and converse with these experts in an intimate setting. It helps develop an interest in whisky and provide a platform to promote Canadian whisky and it’s connection to our region.

The Tourism Industry Association of Ontario Sustainable Tourism Award is presented to an organization, individual, or initiative that has made a viable and maintainable contribution to the practice and promotion of sustainable tourism in Ontario. In addition to functioning with paperless ticketing for their tours and events and implementing green measures at their festivals, events and tours, WindsorEats also partnered with the Essex Region Conservation Authority to provide a portion of experience sales directly to planting new trees within Windsor-Essex.

“Trees have been identified as the biggest weapon in the fight against climate change, and in the Windsor-Essex region, merely 8.5% of our landscape consists of natural areas,” says Susan Stockwell Andrews, President, Essex Region Conservation Foundation. “Millions of trees need to be planted locally and we are incredibly grateful to the WindsorEats team for becoming our first official ‘Partner in Sustainability’ to support this effort. We hope many other businesses will follow their lead in demonstrating corporate social responsibility, and extend our sincere congratulations to WindsorEats for this well-deserved recognition.”

Winners of the awards will be announced – virtually – at the 2020 Ontario Tourism Summit Awards Gala on October 27, 2020.