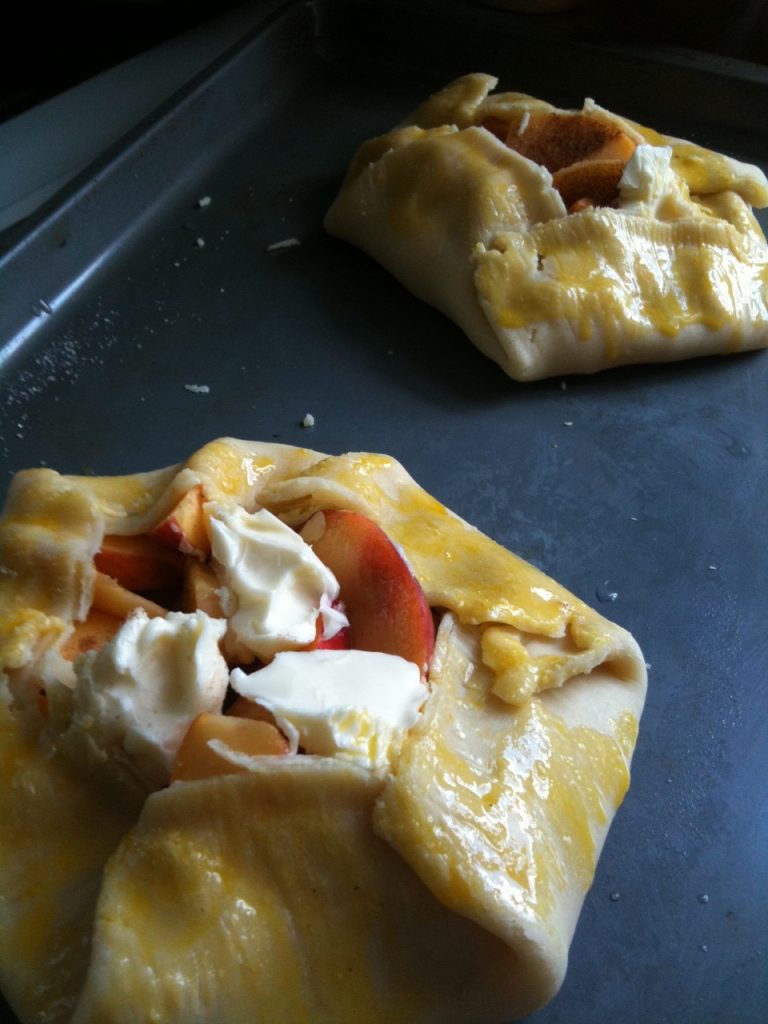 On a recent trip to the Downtown Windsor Farmers Market, I took my mom and Sean along with me. My mom had never been and I wanted to show her it was an easy way to shop local. Sean came along for the ride.

While we we’re making our way to each vendor, Sean noticed all the lovely peaches that were in season. I suggested we pick up a few. If you know Sean, then you know that his stomach leads the way when he shops and it makes all the decisions.

He convinced me that we should buy a large basket of peaches as he planned on eating quite a few of them. Well, he didn’t. And I soon found myself with over a dozen ripe peaches.

Now, you can use homemade dough but I had a few frozen pie shells in the freezer and decided to use them for this simple, easy dessert. Just let the dough reach room temperature.

Lay the dough out on to a baking sheet (remove it from the tin if using frozen).

Wash and cut 2-3 peaches into sliced, skin on. Place them in the middle of the dough.

Fold in the edges of the dough.

Beat one egg and use as an egg wash over the dough.

Bake in the oven for about 15 minutes or until it’s a nice golden brown. You’ll notice all the juices will start to bubble.

Now I would love to show you the final product, unfortunately I decided to let the crostatas cool for bit. by the time I got to them, all that was left were a few crumbs and couple peach slices. Lesson learned.

This recipe is based on what I had in my cupboard. The cinnamon added a lovely flavor to the Crostata, but you can definitely add other spices like nutmeg.

You can serve it warm with a scoop of vanilla ice cream or just have it room temperature. Either way it’s delicious!! Now to figure out what to make with the remaining 1/2 dozen peaches.