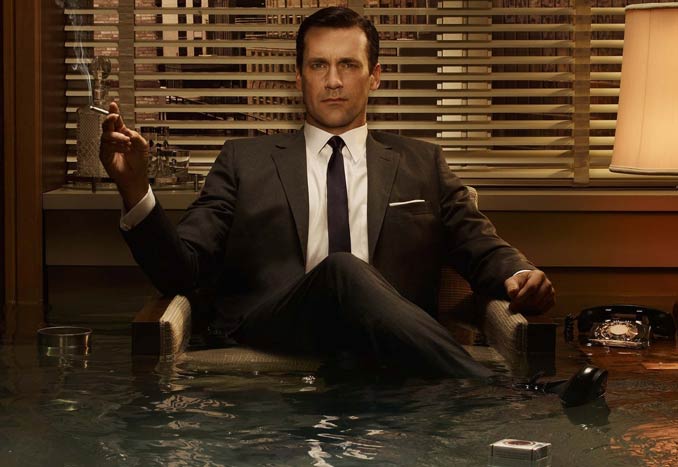 The Ivey Business Review is hinting that there may be a connection between Mad Men’s 2007 start and the beginning of increased global market share for Canadian Club the same year.

The article goes on to state:

In the decade before Mad Men’s release, Canadian Club had not only missed out on 36% industry volume growth, it had actually declined by more than 10%. In fact, the brand was in its 17th consecutive year of declining case sales when Don Draper ordered his first C.C. on the rocks. But only two quarters later, the brand had turned a corner. In the years since (and in part due to Boardwalk Empire, which premiered in 2010), the hundred and fifty year old whiskey has enjoyed 4.3% compound annual growth. Though this is still less than the whiskey market overall (+5.8%), it exceeds the growth rate of Beam’s 15 other whiskies by more than three times.

Is that a smoking gun? Not really, but, they couldn’t find any other reason that would be responsible. The company itself is on record saying they don’t believe the show had anything to do with sales. In an April 2012 article in the Globe & Mail, Cheryl Hudson, brand manager for Canadian Club in Canada, says Mad Men wasn’t entirely to thank:

Beam does not attribute all the sales growth to the TV exposure, but the company believes it has reinvigorated popular perceptions of the product. “People are talking about it again, and it’s visible to young consumers,” Ms. Hudson said.

That being said, they aren’t dismissing it. In that same Globe & Mail article, Tish Harcus, curator of the brand’s archives in Canada, speaks of its importance:

“It has made a huge impact on the brand,” Ms. Harcus said of the liquor’s TV stardom, which has given an air of excitement to a segment of the liquor industry that hadn’t had much lift in recent years.

Along with Canadian Club, WindsorEats is happy to ride the coattails.

“We’ve had huge success with our Drinks of Walkerville walking tour, ” says Adriano Ciotoli, co-owner of the food and drink companion. “The tours have been so popular they’ve led to overnight packages being offered. ”

Adriano mentions that customers from across North America and even Europe have taken the tour and one of the first things they bring up, even before the tour begins, is either Mad Men or Boardwalk Empire.

Canadian Club whisky is only distilled in Windsor, Ontario.

“It’s great that such a big part of television history takes part right here in our small city,” he says. “Many locals aren’t even aware of some of the history and folklore in the neighbourhood immediately surrounding Canadian Club’s home.”

Another interesting tidbit of information: every bottle of Canadian Club seen in Mad Men came directly from Windsor, Ontario.

Want to try one of Canadian Club’s newer products, Dock 57, a spiced whisky. Try this recipe for a a Spiced Whisky Caesar. Delicious!