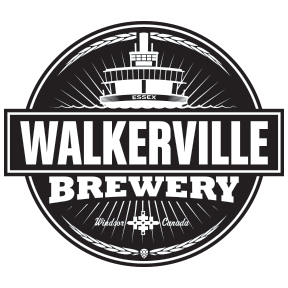 Walkerville Brewery is one step closer to opening their doors to the public.

The sights, smells and sounds of the Wallkerville Brewery will once again be present within the Distillery District of Walkerville. Brewmaster Nick Posloski began brewing today at 11:00am. Two new beer styles will be hitting the tanks, and will soon become the initial beers of Walkerville Brewery.

You may think it’s a little odd that a boat would be the feature of the Walkerville Brewery logo, but it all becomes a little clearer when you dig deep into the rich history of Hiram Walker. The Ferry Essex was first leased by him in 1880, launching “Walker and Sons Ferry” for the primary purpose of Walker’s own travel. In 1888 the ferry company changed its name to Walkerville and Detroit Ferry Company becoming a proper commercial venture moving passengers from the dock at the foot of Devonshire Road (SecondStreet) to the foot of Walker Street (just east of Atwater) in Detroit.

The Ferry Essex symbolizes the connectivity and resilience of two proud nations. The Essex becomes synonymous with the intrepid spirit of the locals and has acted as a testament to the longevity and preservation of the natural surroundings where Walkerville Brewery stands today; a world renowned distillery and heritage district.

Brewmaster Nick brings youth, enthusiasm, passion, education and hands on brewery experience to his new position. He studied in Berlin and brewed in both Ontario and British Columbia. Through his recipe development and brewing philosophy, his opportunity to Captain the “Essex” and develop the personality of Walkerville Brewery will be an exciting journey. Nick has an amazing pallet, knowledge in all areas of brewing and a thirst to share his beer with all of us.