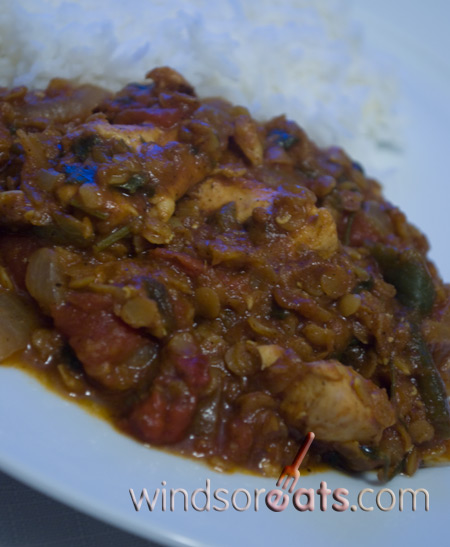 Tonight, Jillian and I decided to go to India…at the dinner table that is.

The meal of choice we decided to go with was rogan josh, or as I kept jokingly referring to it as, Chicken Josh Groban. We saw a recipe in my Jamie”s Food Revolution

cookbook, and decided to give it a whirl with our own little twist. While there are multiple variations of rogan josh that you could do – beef and lamb to name a couple – we decided to go the chicken route.

To speed up the preparations, Jillian and I tag teamed this dish. I began by chopping the chicken breasts into 1-inch cubes. Jill peeled and chopped the onions, grated the ginger and chopped the cilantro, including the stalks.

We used Jamie Oliver’s recipe for rogan josh paste as is and it tasted delicious before including it with the rest of the recipe. Here is it:

Even though we tweaked Jamie’s recipe a bit, it was extremely delicious! We served our chicken rogan josh with a side of white rice.

Jill mentioned that she would have liked a little more heat to it but that is up to each persons individual taste.

If you try this recipe and enjoy it, I highly recommend Jamie Oliver’s Food Revolution cookbook as it has many more excellent recipes.