After a successful foray last year, chef Anthony Dalupan is returning to the Outdoor Food Hall in Windsor, Ontario, this weekend.

One of the founders of Three: A Tasting Bar, Anthony is now the chef  at the Unemployed Help Centre and heading their Farm to Food program. He’s excited about the opportunity to get creative and showcase his skills for the general public again. 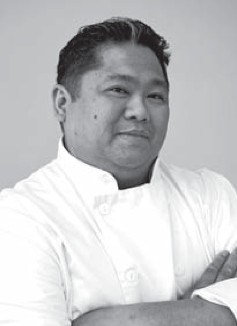 Philippines-born, Anthony had already graduated from the University of Windsor before deciding to enrol at the Pacific Institute of Culinary Arts, Vancouver, BC. In British Columbia, Anthony managed several properties for Granville Entertainment. He then travelled back to his Canadian hometown, Windsor, Ontario, to open a small 40-seat restaurant, “Three A Tasting Bar” with his partner and wife Kathleen Hart.

Raising their daughter Hannah, the ambitious couple continued to expand their business with a catering company called “Bamboo”. While at Bamboo he honed in on his craft, designing original dishes and menus for each event with a majority of the ingredients grown in
Southern Ontario.

They were both later commissioned to write a cookbook, “A Taste of Ontario” for the Ontario Greenhouse Vegetable Growers, a marketing group that represents all greenhouse growers in the province of Ontario. Chef Anthony was a culinary instructor at St. Clair College of Arts & Technology, and an active member with the Culinary Guild of Windsor.

WHAT IS CHEF ANTHONY COOKING?

Pieces of fried Chicken, Kimchi, and shredded cheese are folded in a grilled tortilla shell, garnished with a Sesame Scallion aioli a side of Pico de Gallo

The Outdoor Food Hall turns Lanspeary Park’s outdoor rink into the city’s largest patio. It features multiple restaurants and chefs all on a single menu and it’s licensed to serve alcoholic, too! Since the rink has a massive canopy overtop, it protects guests from the summer sun and any rain, offering an all-weather patio.