When you’re the regions lone festival dedicated solely to craft beer, breweries are much more willing to provide some special treats for your audience.

Three breweries in particular are bringing a single keg each of a special beer to offer up at the 2016 Windsor Craft Beer Festival and once they’re gone, they’re gone. Here’s a look at what they are:

Named the 2016 Canadian Brewery of the Year, Side Launch is bringing us their very last Germanic Bock keg of the season. Available only on the night of Saturday, October 15, the Germanic Bock is a strong dark German-style lager. It has a rich and toasty character from the liberal use of Munich malt and has enough hops to support the balance the malt flavours. A slight caramel and dark fruitiness becomes more obvious as the beer ages, but only enough to provide a hint of sweetness that lingers to the finish.

The Side Launch Germanic Bock was a gold medal winner at 2016 Canadian Brewing Awards.

How special is the 12 Mile India Pale Lager’s appearance at the 2016 Windsor Craft Beer Festival? Well, if you’re able to get your hands on it when it’s tapped on Friday, you’ll be enjoying a the 12 Mile’s last keg in Ontario.

It’s a unique fusion of spirited new world hops balanced with a special lager yeast which creates a cultured body with tropical fruit and citrus notes. This India Pale Lager is ideal for both IPA and Lager aficionados.

Remember, the last keg in Ontario will be tapped Friday, October 14. 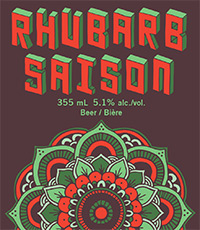 Here’s another popular saisonal that’s on it’s last keg of the season on Friday night only.

A gold medal winner at the 2016  Canadian Brewing Awards, the Rhubarb Saison is a flavourful saison with a twist! This crisp and refreshing beer has a mild malt body with spicy notes from the farmhouse style yeast. Working with the Aberfoyle Farmers’ Market, over 200 pounds of Ontario grown rhubarb was hand picked by growers and added to this brew. The rhubarb adds a slightly sour and tart finish that is best enjoyed outdoors!

If you haven’t purchase your tickets yet, do so quickly as last years Saturday night was an advance sellout. Tickets are $25 in advance and include 5 tokens for beer/food and are $40 at the gate, if available.