Back in February, WindsorEats broke the news that Craft Heads Brewing Company was one of many new start-ups looking to launch this year in Windsor’s craft beer scene. Well, they are now announcing their location.

To be located at 89 University Avenue West, at the intersection with Pelissier, it was a long, tough process for owners Steven Fabischek and Bryan Datoc.

“The process could be described as both exciting and taxing,” Steve says. “It all began with a discussion between Bryan and myself on how much floor space we would need for the brew equipment, fermentation vessels and conditioning tanks, as well as taking into consideration how big we would want the tap room to be.”

The duo were primarily focused on three regions in the city, namely Olde Walkerville, Sandwich town and the downtown core.

“There were countless days of searching the commercial real estate ads and going for long walks through those neighbourhoods, jotting down addresses to research and peering into windows of empty units,” explains Steve.

Their final decision to locate downtown was influence by a few factors, the first being that the location was already completely setup as a fully operational and furnished bar. Secondly, Steve and Bryan mentioned the proximity to college and university in the downtown core also played a role.

“We believe being in the downtown core right in the middle of all the action, as well as the influx of post secondary level students will be beneficial,” says Steve.

Craft Heads might not be ready in time to serve their brews at the Windsor Craft Beer Festival taking place October 17-18, but, they will be on hand to talk to festival goers about what to expect from them.

What can customers expect once Craft Heads opens the doors to the public? Beer. Lots and lots of beer. The duo are looking to establish approximately 4-6 standard, year-round beers which will include standard styles like an IPA, blonde ale and amber ale. On top of that, Steve and Bryan and looking to showcase their creativity with flavoured beers such as a milk chocolate stout, blueberry wheat and pumpkin ale. They are working on offering up to 30 different beers with the option of hosting other Ontario craft brewers with our remaining on a number of taps.

Craft Heads will also host friendly competitions for their customers to submit beer flavour or style ideas along with their own inspirations. The winner will then be able to come in and brew their beer with Bryan and Steve, name the beer themselves and it will be served on tap in the tap room.

Bryan and Steve and anticipating a very industrial in look and feel for the decor with plenty of wood, brushed aluminum and steel accents. 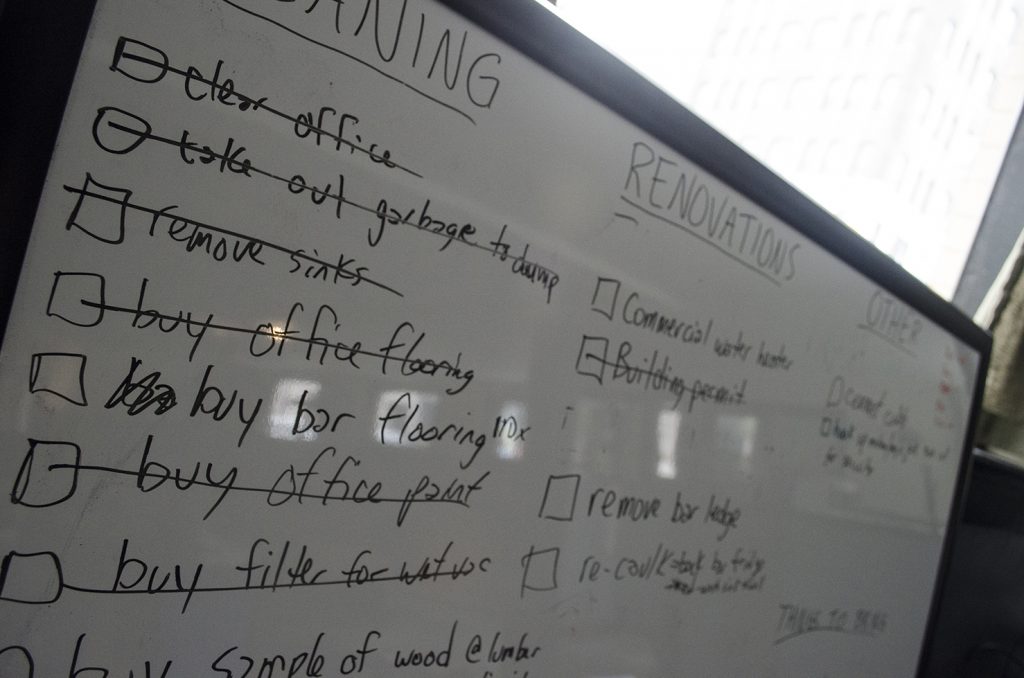 While the entire space has been stripped bare, Steve said there weren’t many surprises.

“We found about $15 in change when rearranging the bar sinks and equipment, but, we spent that pretty quick with our great neighbours Terra Cotta!”