After a trip to Bologna a few summers ago, I’ve been obsessed with finding the traditional recipe for Bolognese Sauce.  I didn’t think eating a ragu could change my life. Wow, was I wrong.

It was like an epiphany, a revelation, a religious experience.  Each time I let my mind wander to that moment, sitting in a piazza in the shadow of a 15th century church, it is vaguely reminiscent of Bernini’s St. Theresa in Ecstasy.  My taste buds pierced with a complexity of flavours.  Never tasted anything like it and haven’t since.  You may think you’ve had Bolognese Sauce, but trust me, unless you’ve been to Bologna, you haven’t.

The city of Bologna and the Emilia Romagna region which surrounds it, is a gastronomic dream.  Aside from the sauce that bears its name, this city and region is also known for its tortelloni, mortadella, prosciutto di Parma, balsamic vinegar, the list goes on and on.  Any self proclaimed foodie must take a trip there at least once in their life.  Each and every dish Sean and I had in this city was outrageous.  St. Theresa thought she was in ecstasy?  She should have heard me devouring a lasagna alla Bolognese!

While roaming, I sent a tweet out asking for any suggestions on things to do or see in this medieval city.  Rino Bortolin promptly responded with “go to city hall, they have the original Bolognese sauce recipe”.

So here we are.  Another year, many months after my taste bud epiphany in Bologna and I’m still thinking about that dam ragu.  I even look at the pictures now and again and reminisce.  While we never did find the “ancient” recipe at city hall, I have come across a few recipes that are claiming to be the original.  It was time to make an attempt at recreating, what I believe, is an un-re-creatable taste experience, but definitely worth the try.

If you know me then you know I love food history.  There’s something about the story of a specific dish that makes the experience of eating it even more enjoyable for me.  Quite some time ago, I wrote about my love for another classic Italian dish, Pasta alla Carbonara, so it was only natural that I to do a little digging to find out what this ragu’s back story was.

It seems that this sauce is a relatively new addition to the Italian culinary dialect.  It was in the late 19th century that Pellegrino Artusi developed the recipe and included it in his cookbook.  As with most classic recipes, there is always debate on what should or shouldn’t be added to the dish. 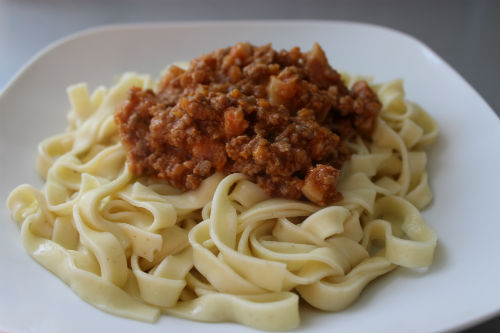 Italians are serious about their food. It permeates and oozes out of everything they do.  As we all know, Italian mammas are obsessed with making sure you have enough to eat. Are you hungry? Did you eat? Do you want to eat? Mangia, mangia!

They are also very particular about how things are done, especially in the realm of food.  So in 1982, just to make things clear, the Accademia Italiana Della Cucina officially registered the recipe for Bolognese Ragu with the Bologna Chamber of Commerce.

This sauce is all about the meat.  Tomatoes play a minimal role here.  The ragu is slow cooked over a stove for hours, the way a great sauce should be cooked.

If you’re going to get traditional, serve with tagliatelle, not spaghetti. And to be even more specific…the tagliatelle should be 7mm wide, uncooked.  Just saying.

And use fresh pasta. Please!  If you’re going to make the effort to create the real thing, then only fresh egg pasta will do.

Of course, you can serve your Ragu alla Bologense however you like.  As with any great, classic recipe, there are many variations.  Nowadays it is typical to pair it with lasagna.  You may even consider topping it over spaghetti (much to the chagrin of many Italians).

After much trial and error, I’ve come up with the following recipe that came closest to my experience in that little piazza in Bologna.

This ragu is rich in flavour and aromatic.  The meat is the star so ensure that you are using good quality products.  For this recipe The Butcher of Kingsville, hooked me up with local beef and pork.  The wine was a chardonnay from Aleksander Estate Winery.

Sauté the pancetta in a saucepan. No need to add any oil as the fat that melts off the pancetta will coat the bottom of the pan. 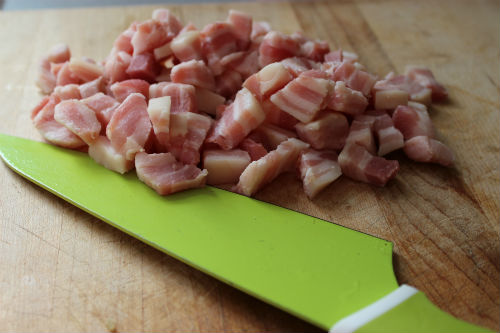 Add the finely chopped vegetables to the pot. 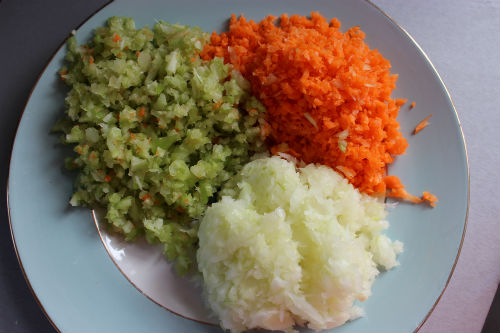 When the vegetables are soft add the beef. Leave to gently come up to simmering point, stirring constantly.  When the meat starts to “sputter”, add the wine and tomato puree and leave to simmer for around two hours, adding the milk bit by bit throughout the cooking process. 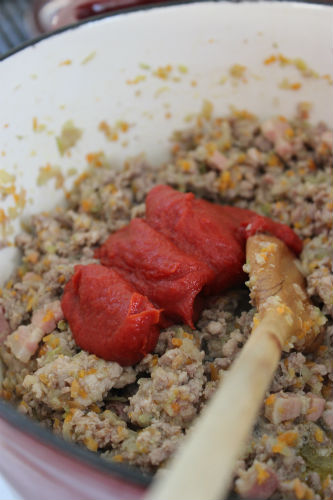 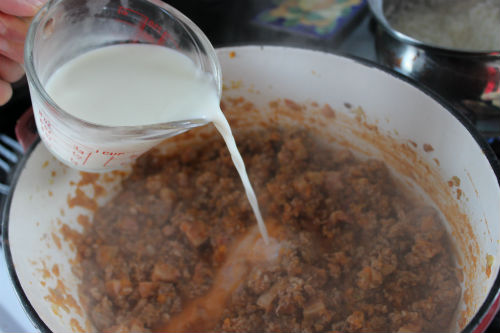 You can add salt and pepper according to taste, but I found it did not need much more seasoning.

Top it over fresh pasta and you’ve got yourself a dish that is reminiscent of a trip to Bologna. Oh, St. Theresa would be proud! 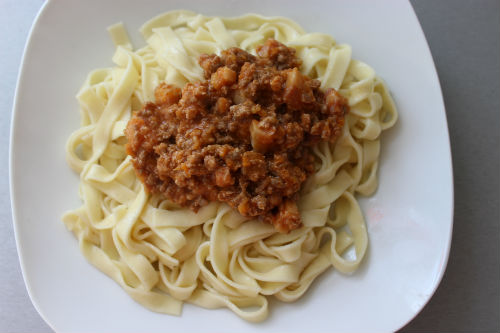