Things are slowly moving along in our kitchen project.  The space has drastically changed and we have a more open concept.  Sean did most of the preliminary work himself but has now handed off the more technical stuff to his brother-in-law, Chris, who, lucky for us, is an extremely talented carpenter.

As with any renovation, once things get going, new problems arise. Ours was a doozy.  Not only did we discover that the previous owner thought he was an electrician (he did a hack job on the electrical which requires us redoing the entire thing) but he also thought he was a master carpenter.

Sometime in the late 1980s or maybe early 1990s, the owner decided to add an addition to the house.  However, he neglected to add proper support to it. 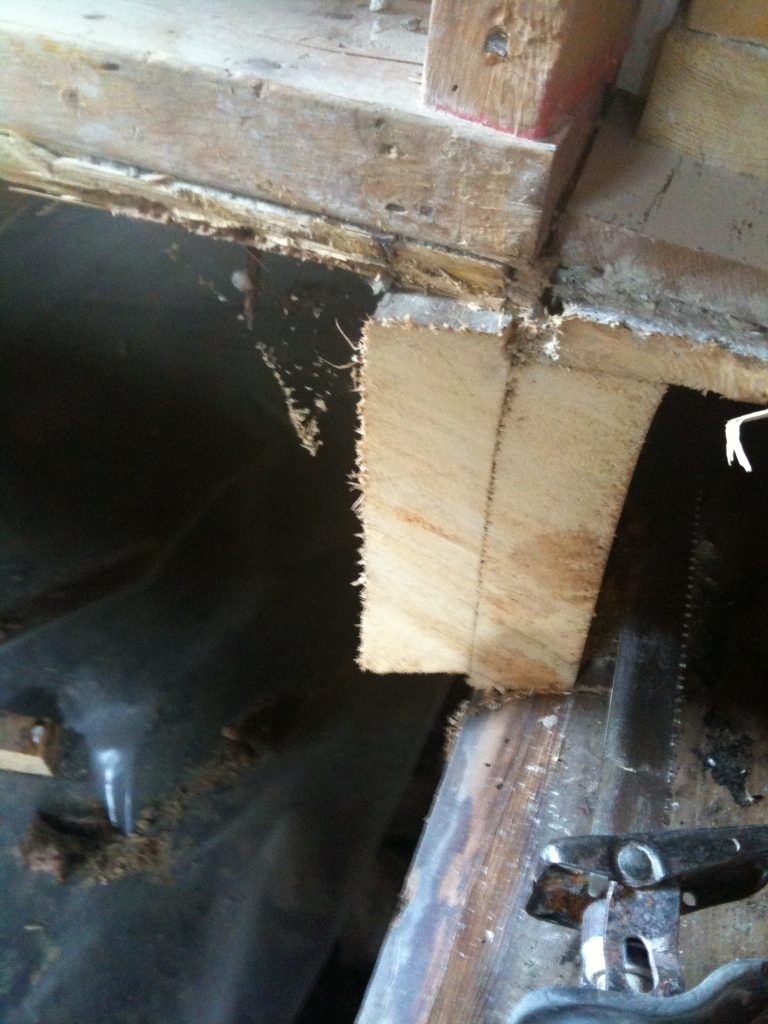 Yes, what you are seeing is what was supporting the addition.  What we now have to do is remove the flooring from not only the kitchen, but the entire half of the house and ensure that the house is properly supported.  We are now well beyond a simple “kitchen renovation”.  In fact, we’re so far passed that I should probably change the title of this post from “My Kitchen Renovations” to “House Demolition, Reconstruction and How I Spent My Entire Life Savings in One Day”.

It’s all a little daunting, but we’ve started it and now we need to finish it. Aside from occasionally making sandwiches for the guys, sweeping and leaving notes on the walls, I’m not sure I’ve been much help.

The good news is that our floor tiles have come in and Sean and I have picked out the kitchen cabinets.  Of course Sean and I aren’t agreeing on all the details of the project.  I want one of the larger walls painted entirely with black chalkboard paint.  He doesn’t.  He’s not exactly sure where my obsession with chalkboard paint comes from (I had bits of it all over my former house), but he knows he doesn’t want a 13 ft wall painted with it.  I also do not want doors that are on hinges.  Rather I want to get my hands on a couple reclaimed wood doors and place them on rolling tracks.  Kind of like what you might see in a loft.

All lovely ideas that come with a cost.  For the time being we’ve had to put the design ideas aside as our first priority is definitely securing those support beams so we don’t end up having half the house snap off.