On April 26, 2010 the Downtown Windsor Farmers’ Market requested a 5-year lease from the City of Windsor for the use of the former bus depot site at 44 University Avenue East. A longer term lease would have qualified the market to apply for numerous grants and would have signaled to vendors that the City is firmly behind the project. Unfortunately, Windsor’s City Council rejected that request, but agreed to lease the former bus depot site until the end of October 2010.

The market is now almost halfway through a very successful second season, but its future is uncertain. The market’s volunteer committee has been asked to consider several other potential sites for 2011, but none of them offer as many benefits as the former bus depot site. The current location is accessible, inclusive, provides covered areas for vendors, has parking, is historically significant and offers room to expand. 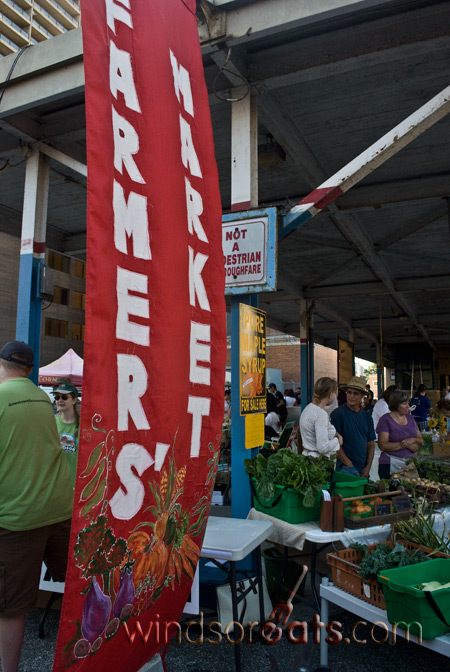 In addition, “one of the important factors for a market’s success is maintaining the same location for at least five years after start-up,” states Tristan Fehrenbach, vendor coordinator for the market. “If we move the market to a new location or if we take the market indoors, that could be our downfall.”

The former Greyhound bus station at 44 University Avenue East sat vacant for several years until the Downtown Residents Association (DRA) decided that it was time to bring a market back to the downtown core. A sub-committee of volunteers formed in the Spring of 2009 and the outdoor Downtown Windsor Farmers’ Market was born on July 4, 2009. Now in its second year, the volunteer-run market is blossoming: vendors and visitor attendance has doubled and the feedback from the customers is amazing.

“We see families, tourists and downtown residents all enjoying the market. It is inclusive and accessible and vibrant,” says JoAnn Sabourin, the entertainment coordinator. “We’d love to work with the city to make this a permanent fixture in the downtown core. The location we have now is perfect and we feel that we have a plan to make this successful for everyone.”

The market is now seeking feedback on a business case for a long-term lease on the bus depot site that would allow it to pursue funding to restore the bus station to its former glory.

“We need to build up support and show the City that this is an important part of the core that should be addressed promptly. We need time to plan for the future or there might not be a market next year,” says Natalie Bownes, market co-chair.

The volunteers and vendors have worked very hard to make the market succeed and add value to the downtown core. Along with spin off dollars that area businesses are receiving, the market currently contributes in a number of other ways. The market hires a site manager, pays workers to clean the site on a regular basis, and pays for their own park amenities like picnic tables, umbrellas, and garbage bags. With a long-term lease the market committee could also apply for funding to help improve the building and make the interior accessible for washrooms.