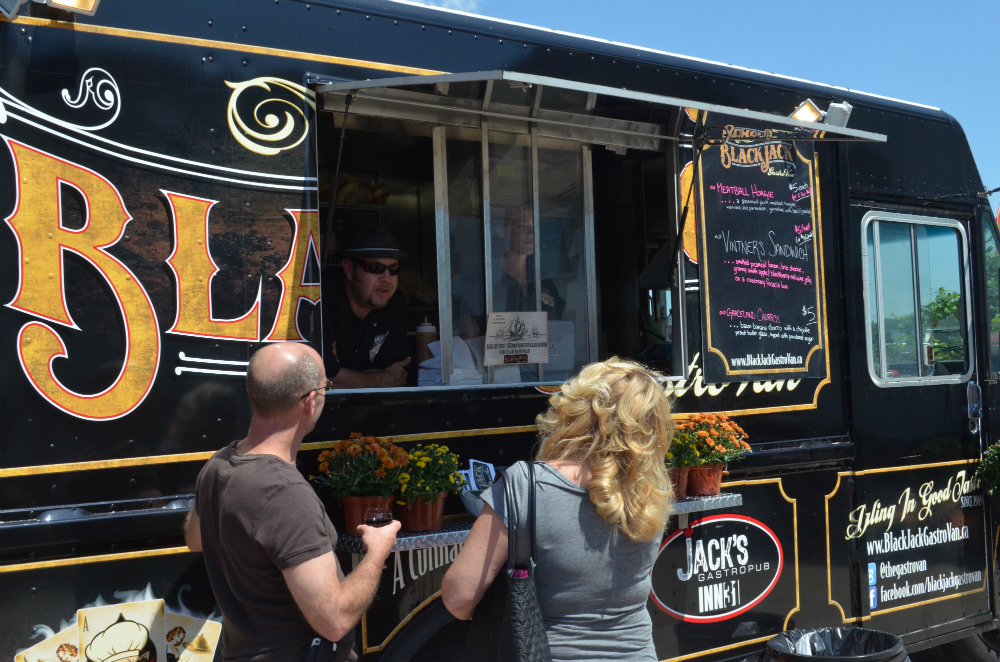 After legally locating at a private location, the BlackJack Gastro Van, operated by Jack’s Gastropub and Smokin’ Aces, was asked to leave by a local business owner. Here is the fantastic response by the food truck owners:

Now for those who were witness to the standoff on Main & Wigle last week, we would like share what happened and our response to being forced to leave.

Last Thursday, we told our customers that the BlackJack GastroVan would be serving lunch on the corner of Wigle and Main. After close to 50 people had shown up, we were forced off private property (which the truck had full permission to be on.)
Food trucks have garnered enormous popularity over the past few years, primarily in larger cities.
The Food Truck battle has been fought in various municipalities across Ontario and mostly in those larger cities like Hamilton, London, Waterloo, and Toronto. If we’re being honest with each other, the concept of a Food Truck might seem a tad foreign in a town like Kingsville
Questions arise like:
In a more famous example, in San Francisco, nine restaurants sued a food truck group that was issued permits by the city to do what food trucks do – they park, they cook, and they serve hungry customers. The restaurants argued that the permits gave the food trucks an unfair advantage. The food trucks, won, however.
Why? They won because Food Trucks represent a model for small business innovation, and entrepreneurial growth. It’s exactly the type of innovation and entrepreneurial spirt that a small town needs if it wants to survive, let alone thrive.
Here at Jack’s we’ve always been the first to push the envelope.
Years ago, we were the first restaurant in all of Windsor/Essex County to convert our restaurant to a  100% non-smoking establishment. This was such a big deal it gained massive media attention and we lost customers, and revenues, because those who wanted to smoke went elsewhere. Then we became the first restaurant in all of Windsor/Essex County to serve only Windsor/Essex wines. Another big deal.
We’re now the first restaurant with a mobile food truck. But as with anything, our goals are not competitive nor do we wish to gain unfair business advantage.
Instead, our objectives are simple.
As with anything in life, you’ll get those who oppose change. They’re stubborn about doing business the way it’s always been done, and unwilling to accept change. Change is scary.
But stagnation kills.
Diversity and innovation is the fuel for life and the fuel for growth.
We want to thank the some 50 people who showed up last week for lunch only to be denied service.
We’ll be in the same location, Main & Wigle, Thursday October 24th from 11am-1pm. We hope you’ll come try us out.