Are You One of Jack's Mo-Fo's? Help Fight Against Prostate Cancer - WindsorEats 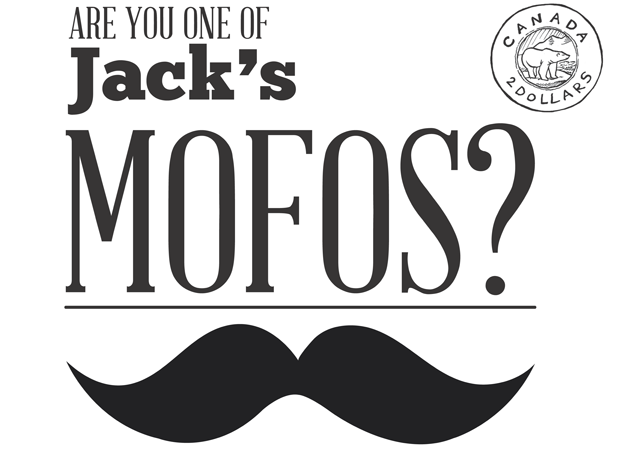 Jack’s Gastropub has announced an incredibly unique “Movember Promotion” for the fight against prostate cancer.

Movember, the popular charity event where men and women across the country raise funds and awareness for Prostate Cancer Canada, is back. Typically, in support of the charity, Men grow moustaches during the month to raise funds for Prostate Cancer Canada. Prostate cancer is the most common cancer affecting Canadian men; during his lifetime, 1 in 6 men will be diagnosed with the disease, and this number is expected to rise to 1 in 4 within a decade.

On November 1st, 2012 Jack’s Gastropub in Kingsville, Ontario will launch its fight against Prostate Cancer with a unique two-tiered promotion to raise funds for the cause. Jack’s is calling the event “Jack’s MoFos.”

First, Jack’s will introduce a special MoMenu. The MoMenu will feature a selection of items that aren’t available on Jack’s current Fall Menu. For every item ordered from the MoMenu, Jack’s will drop a Toonie into the MoMoney jar. At the end of the month everything in the jar will be donated to Prostate Cancer Canada.

Secondly, Jack’s is also giving its customers the chance to take part in supporting the charity. For a $2.00 donation in the MoMoney Jar, men, women, and children can have their photo taken at Jack’s MoFoto Booth. Jack’s has set up a specially designated area with a MoFoto Booth complete with a number of fun moustaches and hats for those without their own genuine lip duster. The photos will then be posted to Jack’s Facebook Page where Jack’s fans will vote on the best “stache.” The winner will receive a Dinner for two at Jacks, a Gift Certificate to Apex Barber shop in Kingsville, and a Night’s stay at Inn 31 at Jack’s.

In addition to the above winner, a second winner will be randomly drawn from all Jack’s customers who join Jack’s  Loyalty VIP Club during the month of November. The entire cash donation and associated charitable tax receipt will be made in the name of the winner.

Jack’s Gastropub is always trying to offer its customers a unique and enjoyable experience. Owner of Jack’s, Trevor Loop says, “Supporting Movember is really a no-brainer for us. It’s an important cause and we know it’s one that our customers will want to support. We also know that our customers will have a ton of fun with our MoFoto booth, and we’re confident we’ll be able to make a sizable donation to Prostate Cancer Canada.”